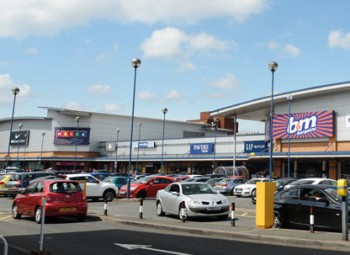 The Astle Outlet Park in West Bromwich is situated in the heart of the English West Midlands close to the M5 motorway and the M5/M6 motorway interchange at Spaghetti Junction. The outlet centre is named after the local footballing legend, Jeff Astle, who played over 360 games for West Bromwich Albion and scored 174 goals - including the winning goal for West Brom against Everton in the 1968 FA Cup Final. As well as offering bargains of up to 60% off the recommended retail price on a range of home and fashion brands, the outlet centre is also close to West Bromwich’s central "Golden Mile" of shops along the High Street from Dartmouth Square Clock Tower to Carters Green Clock Tower.

Within the Astle Outlet Park there are three major outlet stores as well as a selection of discount stores. M&S Outlet has a wide range of Marks & Spencer’s branded fashion for men, women and children as well as their world famous lingerie and a range of home goods and furniture. Gap Outlet provides top fashion for all ages from babies and toddlers through children and teens to stylish and comfortable men’s and women’s clothes. Nike offers a wide range of sporting equipment and sports clothes, as well as casual fashion clothing, at discount prices.

For a break from bargain hunting, the Astle Outlet Park also hosts the PureGym 24 hour gym and Mecca Bingo hall as well as food outlets including Subway and the Paradise Lounge Indian restaurant; with all the facilities of West Bromwich High Street also close at hand.

Access : From the M5, exit at junction 1 and take the A41 (The Expressway). At the roundabout take the first exit on to Cronehills Linkway. At the following roundabout, take the third exit in to Astle Retail Park.
Brands: M&S Outlet, Gap Outlet, Nike, Pure Gym, B&M, Trespass, Domo, Pavers Shoes,
Link : More information on Astle Park